Custom Pressure Washer Trailer In Action 7-19-21
Wags shows use a new power washing trailer and how well it works to clean a building
28 October, 2021 by

In this video Josh Wagner, aka Old Man Wags, gives us a quick overview of a new trailer we built for a professional power washer. Then, he proceeds to pressure wash / soft wash a 2 story commercial building and sidewalk using the 8GPM / 3500 PSI hot water pressure washer and a Whisper Wash surface cleaner for the side walk. Along the way he explains why we soap from the bottom up and how to use the by-pass system to increase flow.  If you need a custom rig, give us a call or use this form >>

Photographs of the pressure washing rig 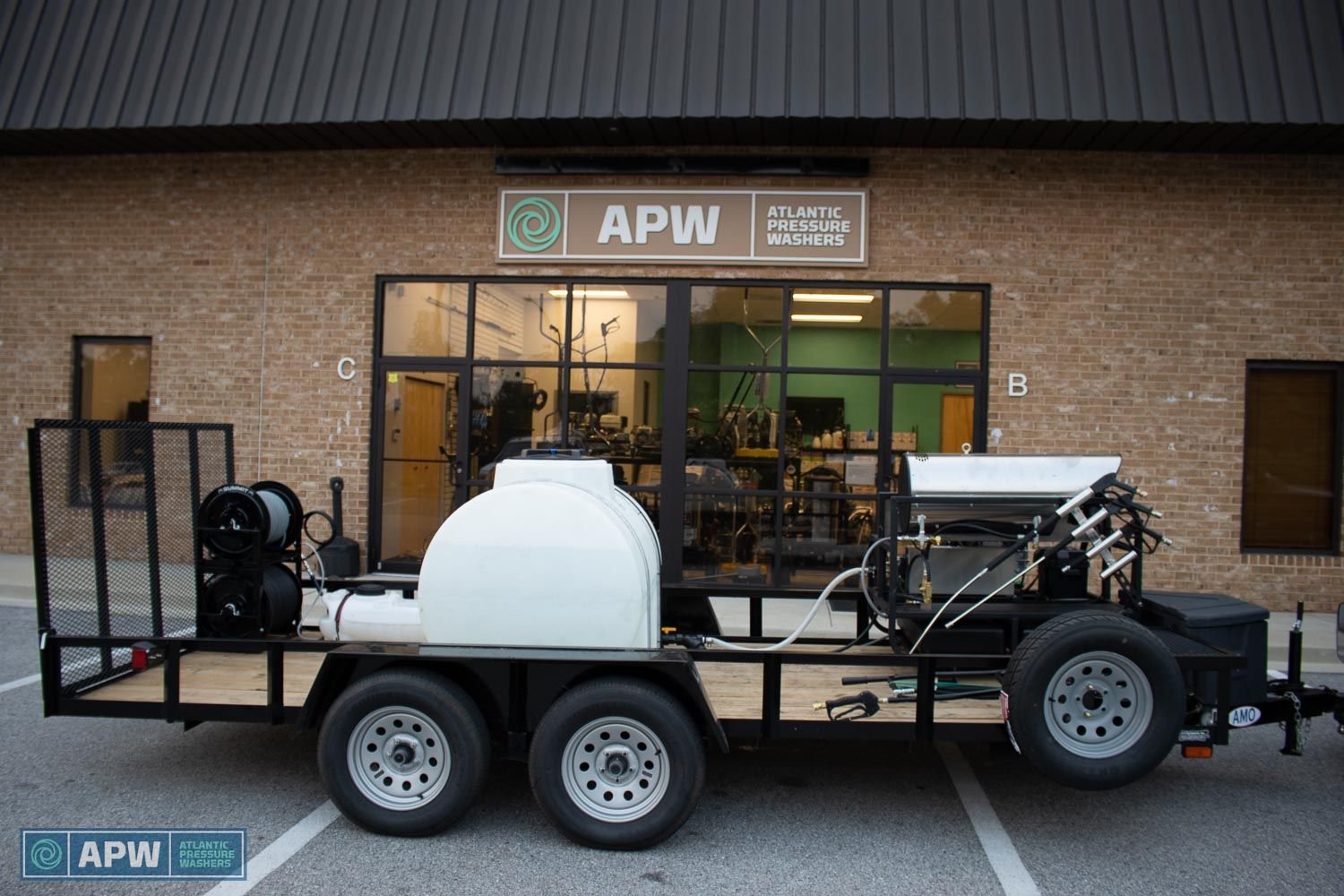 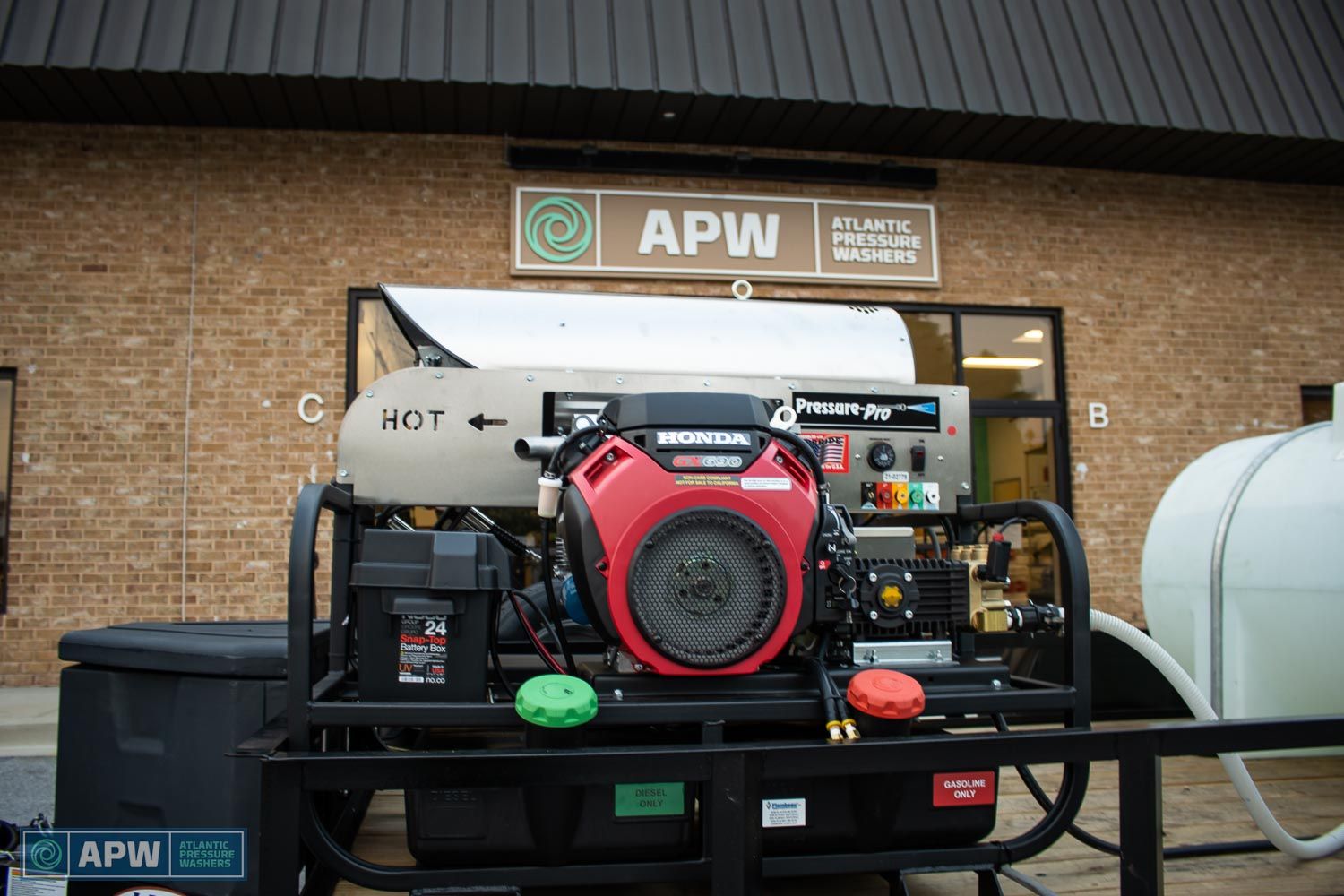 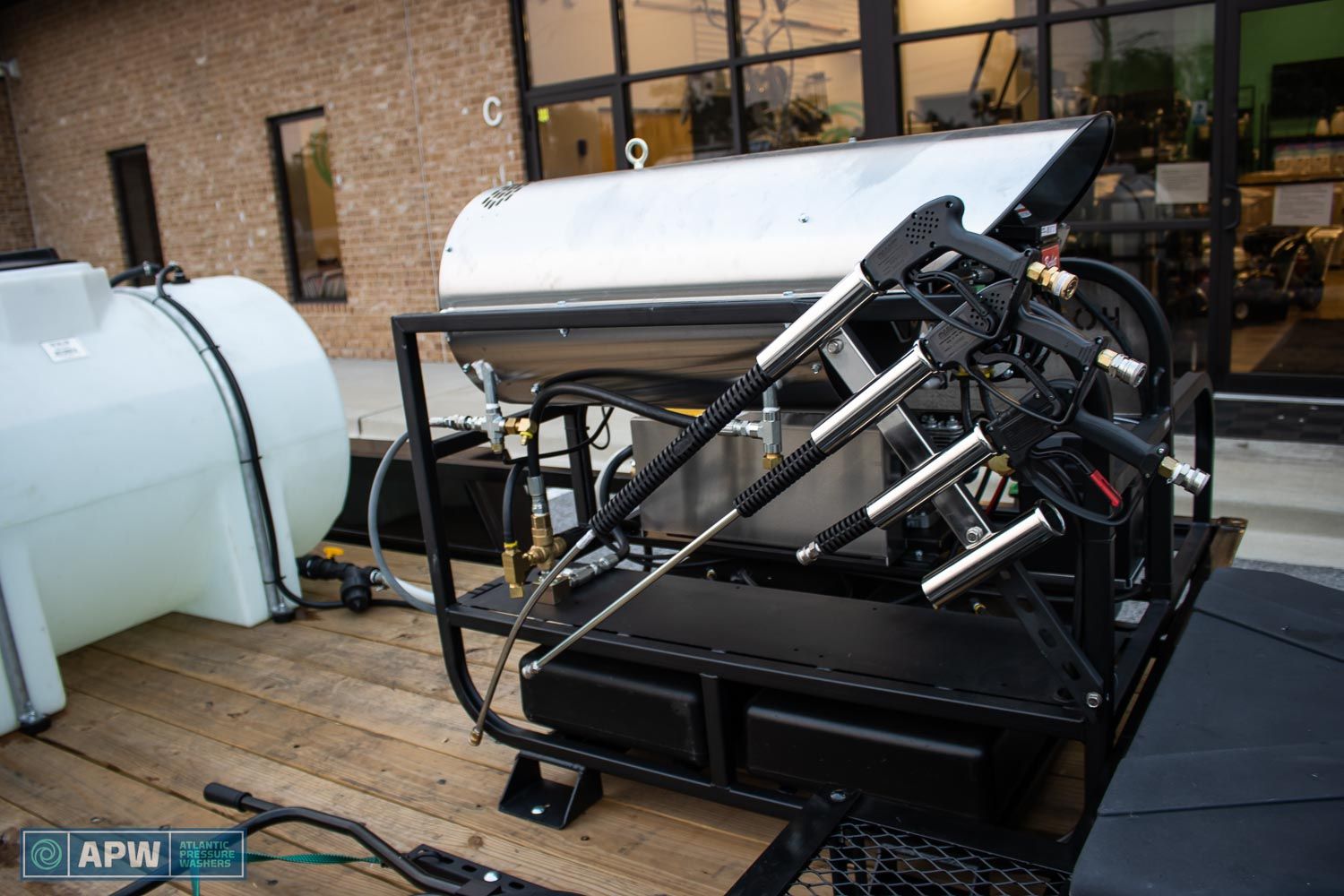 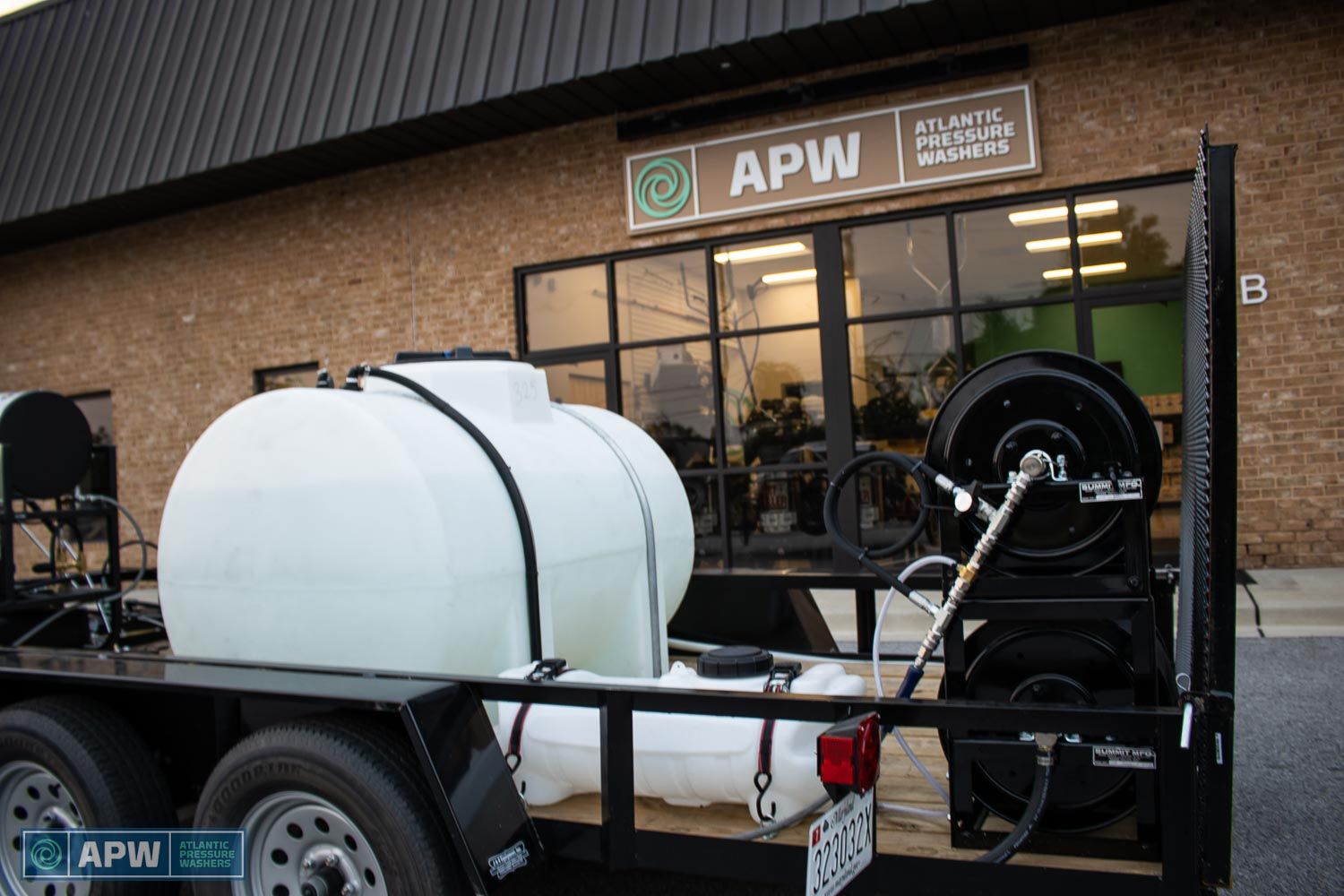 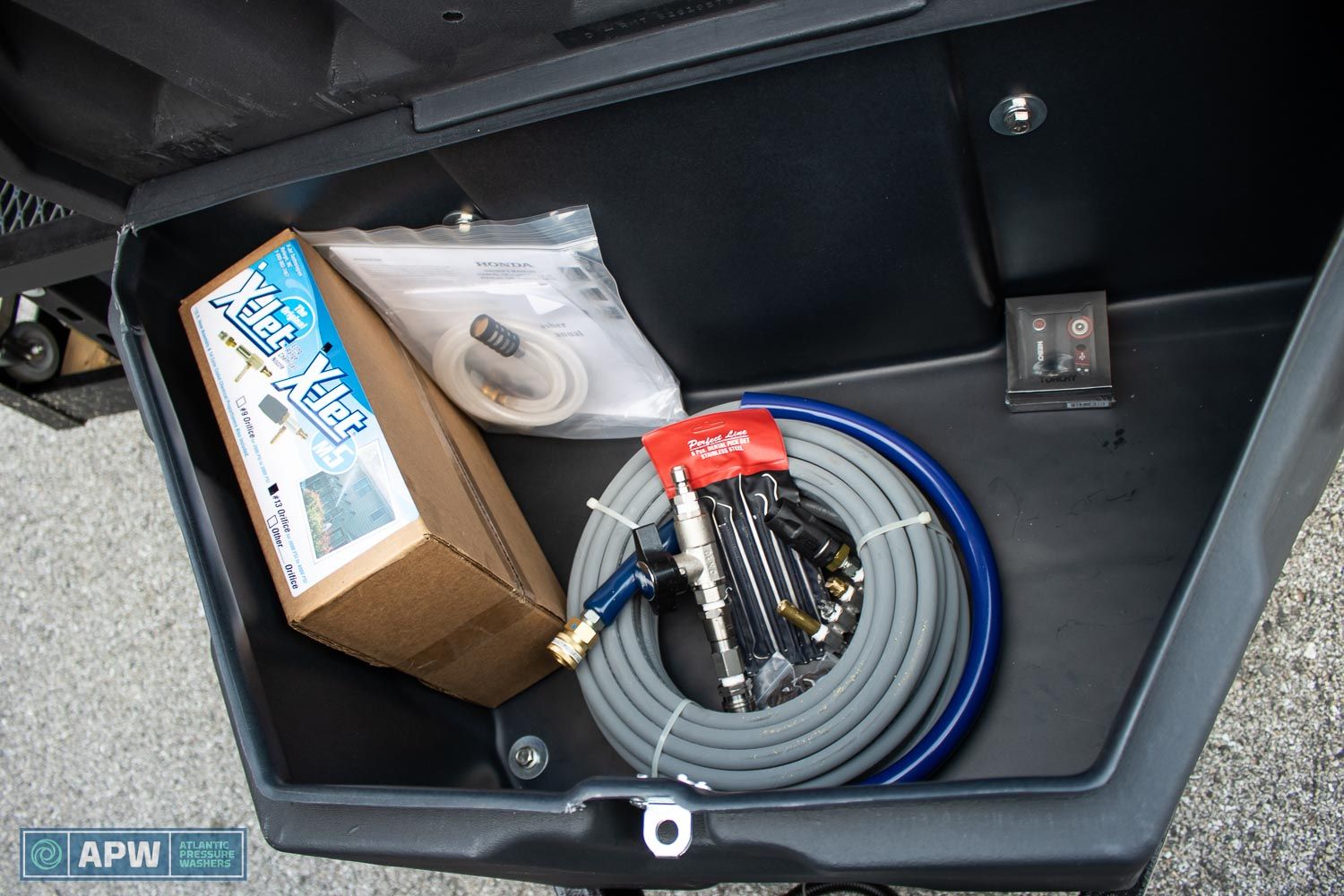 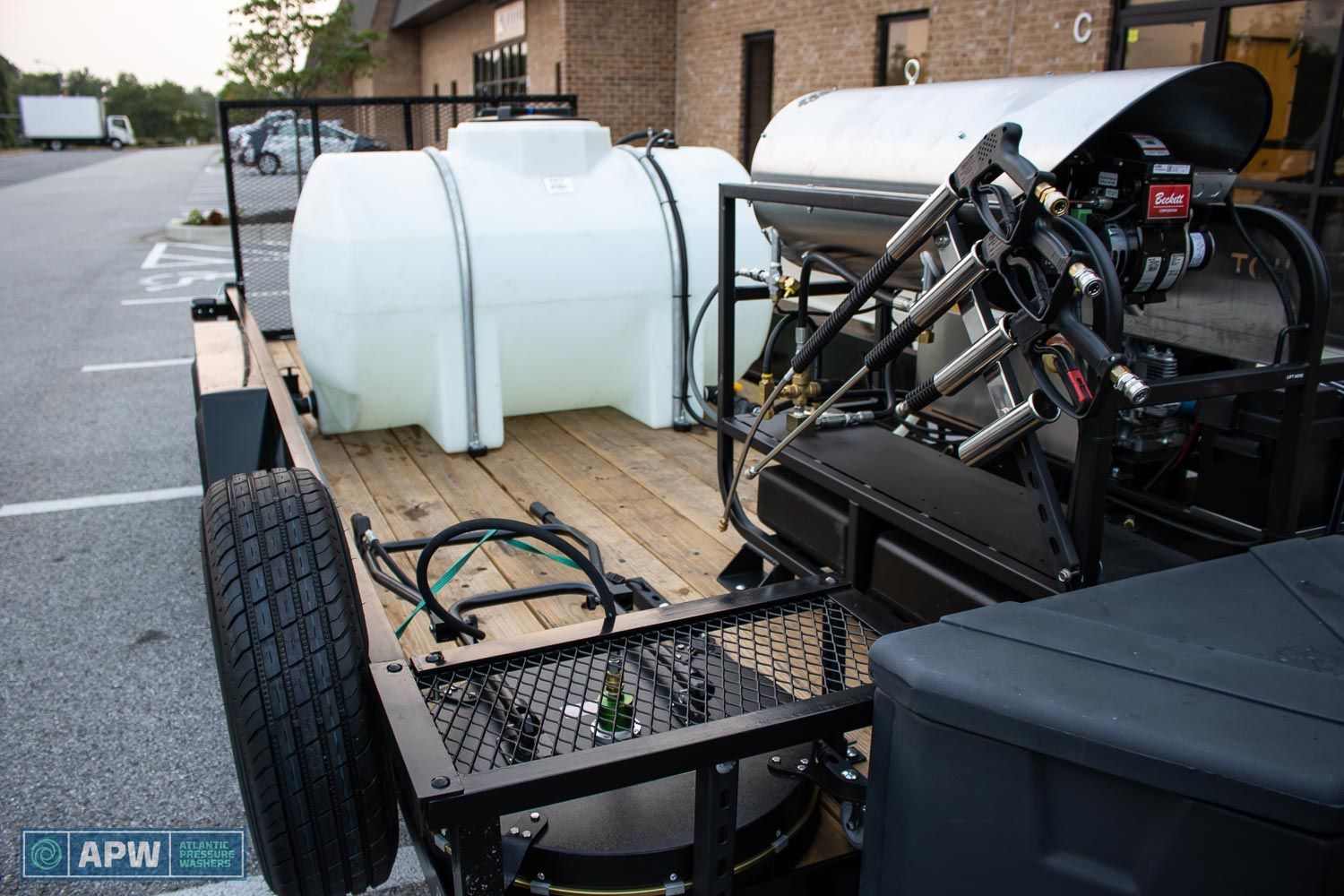 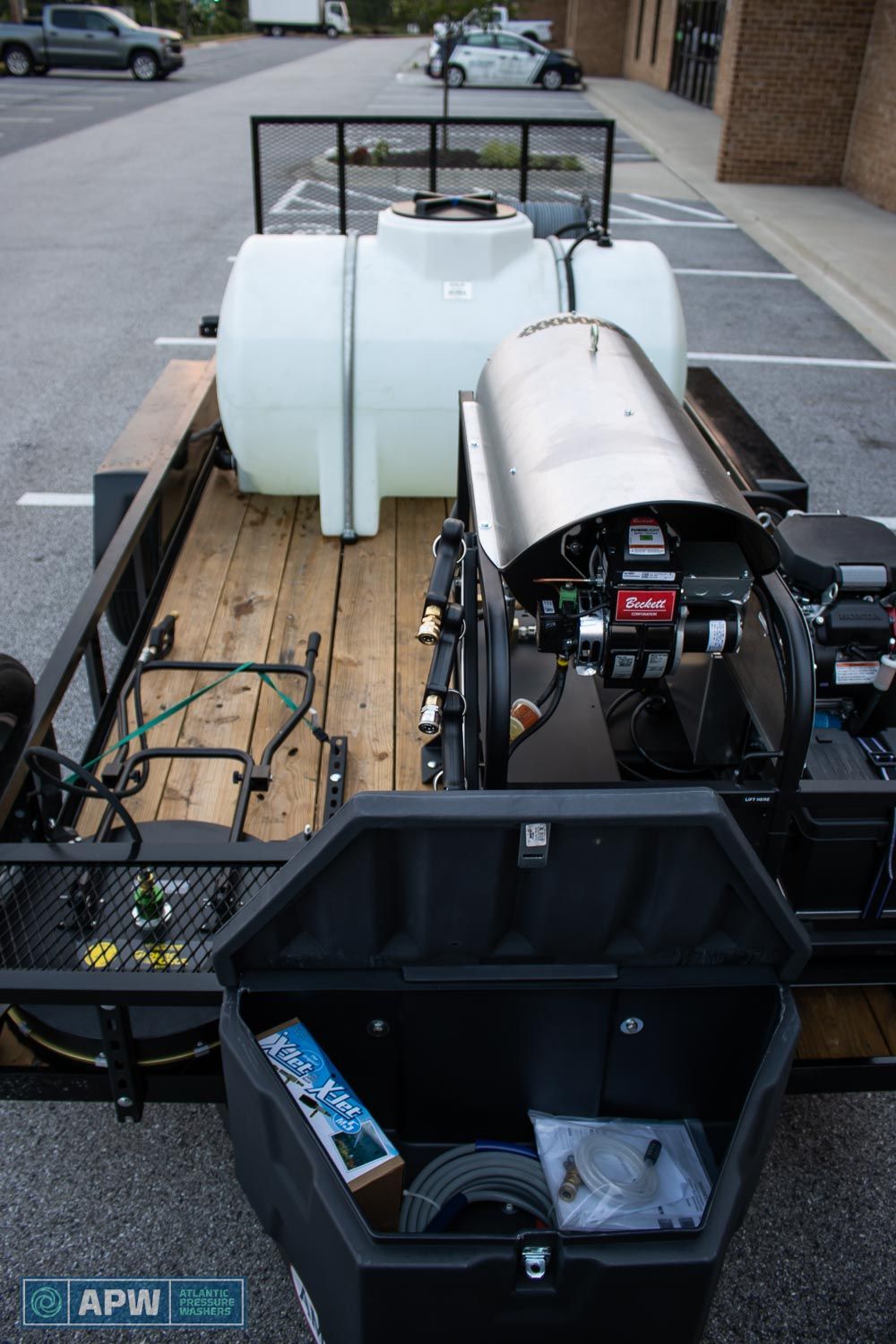 The soap that we are using today is called The Boss by Dirt Killer. What this is is a very eco-friendly degreaser. It is great for cleaning just about every storefront that you're going to come across. It's going to leave glass looking amazing when you're done with it. It's going to do a really good job taking up some of the oil spills that is actually on the concrete. And most importantly, easy to work with, has a pleasant odor and relatively cost-effective. We're going to go ahead and fire up in a second. Let's stay tuned, focus on what we're doing, our actual techniques here and go from there. Okay.

All right. So the first thing that we're doing, we're just warming up the machine for a second. We're letting the water flow through, but on the nozzle we're making sure that everything is where it's supposed to be. And there's no clogs in anything. One of the benefits of our high pressure ball valve assembly is that it can swivel even under pressure. It's being [inaudible] If I'm holding right here, as I'm walking with my line, my hose won't get tangled up. As long as I'm moving straight. The other thing it allows me to do is turn our flow on and off. That's allowing me to change some accessories. So we're going to go turn on our injector bypass. We're going to soap up our storefront and then we'll come back and talk about it some more.

All right. So we're just going to pause for a second and talk about soaping technique. We paid attention to the majority of the building. I'm gonna step out. So I don't have any suds on me. We paid attention to the majority of the building. We tried soaping from the bottom up to the top. If we did start at the top, you notice that I was working a little bit faster to keep water moving the entire time, moving down the surface. The reason it's important to soap from bottom to top on nice hot days like today, where it's 90 degrees, the surface is super hot and we didn't do anything to cool it. If you start at the top and rely on it, the rinse down, and just basically pretending that gravity is going to do something, what will happen is all your water is going to start to evaporate.

Your soap is going to get more concentrated. You're going to get run lines going down the building surface. That's not good. That's really hard to correct after it's already done that because now you have to clean something that's already been cleaned. And it just doesn't always even out as nice as you'd hope to as if you had soaped the entire thing. If you look over the rest of our building, we have a very nice basically soap wall, if you will. Whereas the part that we rinsed from top to bottom or soap from the top to bottom, we have all these run lines. Now this buildings relatively clean. So we're not going to see anything here, but you can get the idea of what that would do if you didn't pay enough attention to it. What we're going to do is fire back up for a second. I'm gonna throw some more soap on it. We'll let this sit and we'll talk about our injector bypass kit.

All right, guys. So while our soap is sitting on the wall, I'm going to explain what we have going on here. Basically we have our high pressure line. It goes in under normal circumstances would hit this injector, restrict our flow, basically put back pressure on and allow it to siphon out of our chemical tank. What we've done is installed a bypass loop, so that by just opening that valve instead of our eight gallons, a minute going here, hitting that, restricting it and becoming six gallons a minute all the way through it has the opportunity to bypass it, giving you your full eight gallons a minute, mainly important for when you're rinsing. Also a really easy way of shutting off the injector. If you want to rinse in low pressure by doing this, you maximize the life of your injector. You also give yourself a lot faster rinse, which we're about to see in a second.

And it can also give you some additional height when you are rinsing, say you're washing a three-story house, you get soap up there and you want to flood everything on the surface. It'll help you do it a lot faster, shoot a little bit higher. The next part that we're going to do while that's dwelling is talk about the J-rod that we have customized to this. So we have our innovative shooter tip. We have our, this is a 15 degree number 12 orifice fan, and we have our 65 degree number 10 orifice fan, basically this is for absolutely flood rinsing. Useless in most scenarios, other than washing down a deck board or doing like a nice flood swoop of a driveway or something like that. Uthis one's going to be kind of mild pressure concentrated 15 degree fan with this machine. I should very comfortably be able to hit about 20 feet of rinsing with this.

And then we of course have our low pressure M-five twist so that we can basically shoot soap real high or shoot soup real low. For the entire video, all I did was use our ball valve to just basically apply soap. The reason I was able to do that is the soap injector set up to draw at low pressure by just cracking back our ball valve. I was able to give myself a very nice aerosolized atomized spray of soap. It agitated a little bit more than any of our standard nozzles can do. If you've never tried that before. Go ahead and give it a shot because you might like it. It just basically agitates the soap gives you a little bit more sud helps everything stick to the surface. And if we were renting in that same exact fashion, it would speed things up too, cause there's no restriction on anything. Our wall has sat long enough. We're going to go ahead and rinse from top down, focus on what that does afterwards. We'll hit our sidewalks. Let's go ahead and fire up.[Pressure washer starting - running ] Alright one more quick shot of our J-Rod. We're going to see the difference between our M-five twist and our shooter tip. So

It's a very nice clean, concentrated fan or sorry, bead. You can do a lot of things. We're just rinsing, soap out of line. The reason we have a shooter tip on here

'Cause out of get ready when says that's going to shoot further every single time. Just give you a little bit more distance. I'm easily clearing one of the two and a half stories, commercial building. I'm not even actually trying anything very low pressure is basically just throwing soap up there for everything that we need for it to do. Once the soap flushes out of our line, we're going to begin rinsing this entire building and all should be good. It looks like we are right about there. I'm going to switch back to our M-five twist isso that I don't need to concentrate on setting a solid bead.

All right guys. So the next thing that we were going to do to our building is basically wash our concrete. We chose the Whisper Wash Ground Force for this unit because according to our customer, his average sidewalk is going to be about two passes on this. Our sidewalk is a little bit wider than most or a little bit deeper. So we're going to make an extra pass on that. But basically we are going to clean from that wall over there and we'll see how long it takes us with our eight gallon a minute machine. Let's go ahead and fire up.

All right, guys. So as you can see, using our eight gallon, a minute, hot water skid, we made quick work of this commercial storefront. This would be the exact same scenario. If we were doing basically this entire strip mall, or if we're just doing one segment, basically we rolled in, we had a plan. We had a very uniform approach to how we were doing this. And by doing that, we made the entire process fluid, made it a lot more profitable for you as the contractor and made it a lot easier to process the work. The same can be true for house washing. If you're set up and dedicated specifically to house washing, you are going to work a lot faster than the guy that set up generically. That's one of the reasons that having a custom rig is really important. Because, if this job, took you four hours versus the half hour that it took me to wash it, you're not making as much money regardless of what you're charging per hour or per square foot, by having everything fine tuned, you can maximize your profitability. You can optimize your business and really you can grow a lot faster in the pressure washing community.